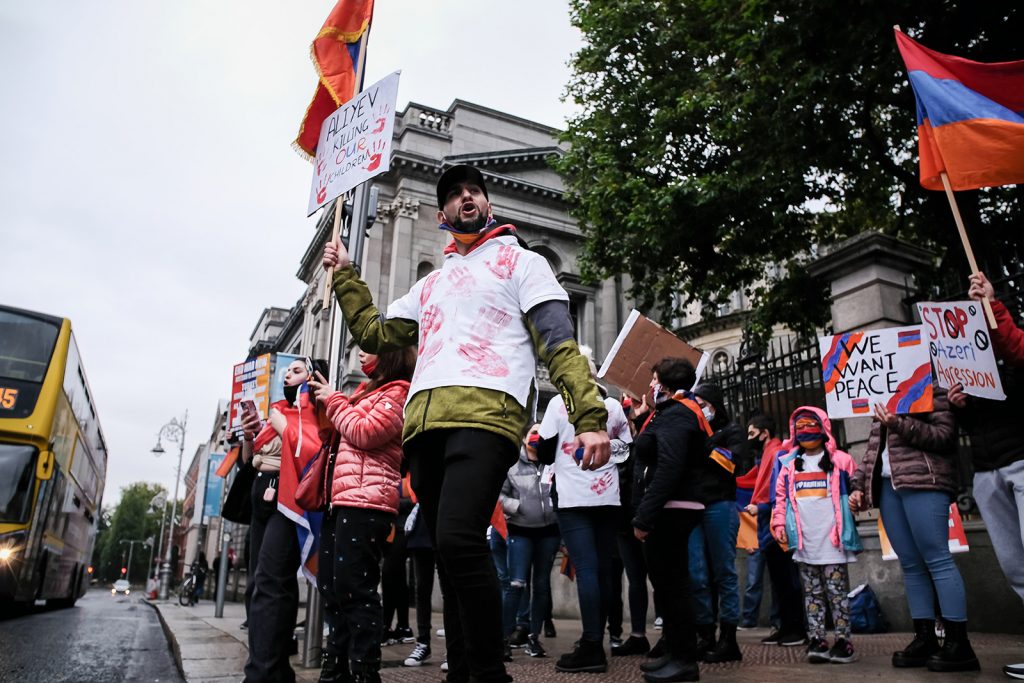 Yesterday, the Armenian Community in Ireland gathered in front of the Leinster House to hold a peaceful demonstration against Azerbaijani aggression on the Republic of Artsakh (Nagorno Karabakh).

Despite the Covid-19 restrictions introduced by the government and all the efforts of the community to minimise the number of participants, a crowd of 80-90 people have gathered in front of the Dáil (Irish Parliament) holding national flags and the posters condemning Azerbaijan and Turkey. Armenian youth were singing patriotic songs and chanting “Stop Azeri aggression”, “Erdogan terrorist”, “Aliev terrorist”.

The demonstration took place at 4:30PM local time when the Committee of Foreign Affairs was meeting in the Dáil. The petition was handed to the Committee on behalf of the people and the Armenian Community on the island of Ireland, with a call to condemn Azerbaijan for their aggression and the Turkey for active involvement in the conflict by use of their military force and by transferring jihadist groups from Syria to Azerbaijan. Over 1300 people mostly non-Armenians, signed the petition within only one day.

Meeting with a number of deputies, the Armenian Community highlighted that they are grateful but they are not satisfied by the statement of the Minister of Foreign Affairs Simon Coveney, calling both parties of the conflict to the peace. It’s a time when everything must be called by their names, and the aggressor must be recognised and condemned for their attrocities.